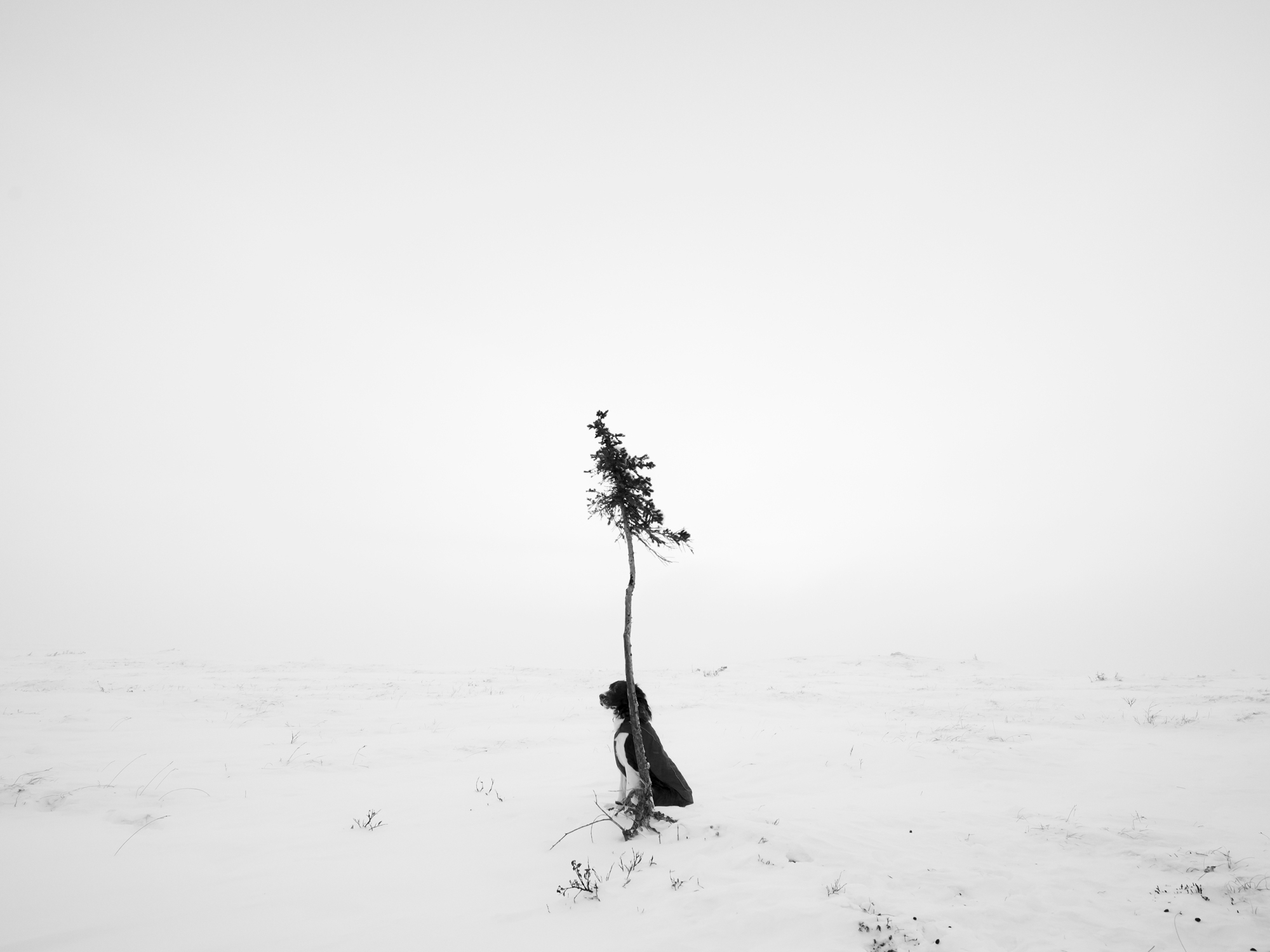 We were awake before 5:30am and he immediately pulled coolers in from the arctic entry. He put them out there the night before so that would be cold before putting beer and savory meat snacks in them for the trip. Whenever the coolers come out, I know it means there are adventures are in store. I stay close to the coolers to make sure that he won’t forget me in his frantic state of gear chucking and coffee chugging. Soon, a red pick-up truck would pull into the driveway and I lost my shit in excitement. Our Malamute friends Howl and Birch and their chauffeur, Eric, would be accompanying us this morning. I was not yet privy to the day’s itinerary.

Turns out we were driving only a couple of hours north of town in search of the infamous “Forty-Mile Herd.” When we stepped out of the car the wind confronted us as if it were unloading a decades worth of pent up frustration from its chest. The snow repeatedly pelted us in the face like a barrage of tiny frozen needles. Surely the plan wasn’t to go out and adventure in these conditions. I mean, were we really venturing out in this shit? This is tundra. There is no where to hide. Even what few trees exist here, with scraggled roots and scantily clad crown, seemed to suggest that we should make other plans. 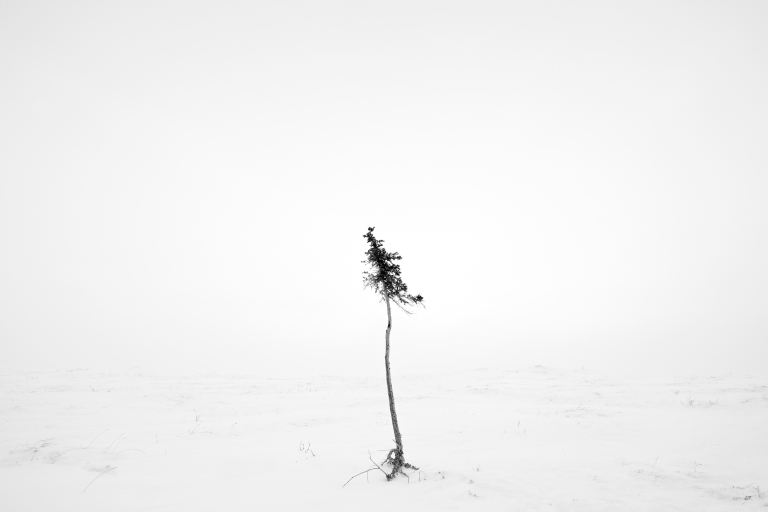 The only hiding spot to be had in the tundra.

I stand here quiet, still in place.
For things beyond the fog we lie in wait.
The snow grows and moves like open seas,
I hold tight to master like proper first mate.

A wind relentless, argumentatively so.
Each step might well as count for two.
As ice accumulates from head to toe
my vision just barely whiskers through.

We walked a few miles. Maybe more. The snow was deep in places, others not. There was clear indication that some form of ungulate had occupied our area recently. The droppings tasted like caribou. Definitely. Definitely caribou. After setting up on a small draw that fed down into a creek valley for nearly a half hour, we spotted the faint silhouettes of 25 or so mammals making their way single file across the tundra. They were coming across the top of the draw and seemed as if they were inclined to take a turn in our direction. They were close. Perhaps no more than 200yds. We frantically scrambled up the ridge to angle them off up near the top of the ridge line. Suddenly, the wind grew and in an instant the visibility dropped to less than 30yds. We were in a cloud. A dense, turbulent, and frozen cloud. Were they lost? We were not lost, I thought. But we had certainly lost them.

Perplexed, we headed back down the ridge to our original post. Somehow we got eyes on the herd again but were immediately bombarded by snowmachines that paraded in Mad Max style over the ridge line and drove the caribou in a westward direction away from us. A man rose from his seat on his tracked contraption and began firing frantically at the caribou. Following suit, an arsenal unloaded from deeper in the haze. Crack. Crack, pahh. Crack, crack, pahh. A crack, and then a piercing sonic whiz directly over our heads. Another crack, another whiz. Bullets were coursing over our heads as if we were on the business end of a near-sided fusillade. He took cover low and behind his pack,  I behind him. Likely a futile effort but seemed the better of our options.

We later deduced that there was a 35-man firing squad situated directly across the draw; the caribou inconveniently located between them and us. With visibility remarkably low, neither of us knew of the others’ existence until the explosive marriage of firing pin and primer.

I have never in my life seen such poor display of marksmanship, sportsmanship, safety, or a lack of common decency for fair chase. I now reflect and consider that I learned two valuable lessons:

This is a text widget. The Text Widget allows you to add text or HTML to your sidebar. You can use a text widget to display text, links, images, HTML, or a combination of these. Edit them in the Widget section of the Customizer.
Loading Comments...
%d bloggers like this: